Her sisters might make the headlines, but Elizabeth Olsen prefers to fly under the radar. 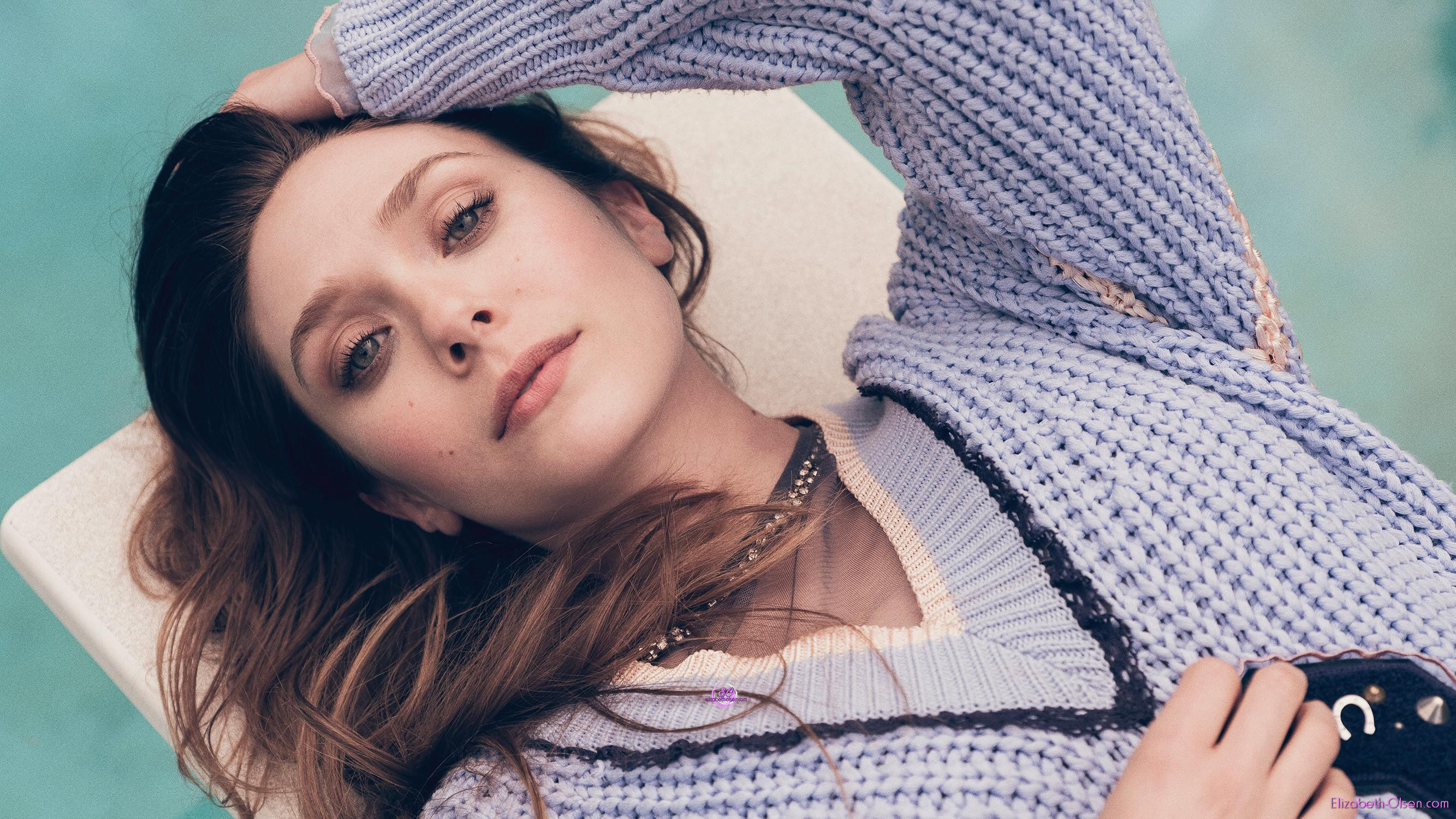 THE SUNDAY TIMES STYLE – It’s cold in Hollywood. On a backlot in Studio City that has more in common with an Essex construction site, I’m shivering in a temporary office, waiting for a gofer who I’m told will take me to Elizabeth Olsen. I watch the back of a tall brunette in a backwards baseball cap and Timberlands and contemplate where Olsen could possibly be in all this prosaic functionality. Ensconced, I suspect, in one of those “better” places reserved for cast, sipping something hot with almond milk. Only when the runner turns around to approach me… She is Elizabeth Olsen. “I’d love to say I drink coffee with almond milk,” she says, her voice low, wry and husky, “but it tastes f****** disgusting.”

On the Hollywood behavioural spectrum, the 29-year-old Olsen — Lizzie to those who know her — is at the end marked “very unshowy”. “When I get photographed, it’s never leaving a cool restaurant,” she says drily. “I’m always at the grocery store buying toilet paper.” This is all the more impressive given her lineage: her older sisters are twins Mary-Kate and Ashley, 31, the child TV stars turned fashion designers of The Row — their diffusion line, Elizabeth and James, is named after her and her brother. I’ve been warned not to talk too much about her sisters, but when I do, Olsen gets it: “Of course people are curious. When you have a public figure in your family, people forget that you have, like, 800 other members of it.” She has made occasional appearances on the brand’s front row, as well as at Miu Miu — Mrs Prada gave her the seal of approval when she cast Olsen for an ad campaign in 2014, a signal that she was the Chloë Sevigny-like girl of the moment. More recently, she has starred in H&M’s SS18 campaign film dancing the tango with Winona Ryder.

In general, however, the younger Olsen has eschewed all Hollywood peacockery. In fact, in the seven years since her breakthrough lead as the escapee from an abusive cult in Martha Marcy May Marlene, which led to a Bafta rising-star nomination and a quiet reputation for dark indie films, the only scandalous headline she’s had is (and I paraphrase): “Elizabeth Olsen is so low-key.” “‘She’s high-strung but low-key!’” she drawls, nailing the sarcasm. “‘She has a hundred neuroses, but so low-key.’”

She takes me to her new “office”, a prefab that resembles a halfway house, empty but for a hefty brown sofa that looks like vintage DFS; she curls up on it cupping a grim-looking takeaway tea. From here she will be executive producing and starring in a 10-part dramedy about a grieving widow called Sorry for Your Loss, for Facebook’s new streaming platform, Watch. As this is a #MeToo world, the team have just watched a video on harassment in the workplace and listened to a talk by a lawyer. “I was like, ‘Wow, this is really f****** thorough.’ Apparently even if someone overhears something really inappropriate that’s still considered harassment. Even though it’s not told to them directly. I was, like, ‘This is crazy shit.’”

Olsen admits she is one of the least likely people to collaborate with a social-media company: “I told them, ‘I’m not gonna create a Facebook page for my character.’” Until recently she was a confirmed iPhobe, but she reluctantly joined Instagram two years ago and now has 1.1m followers, which she finds amusing: “I don’t understand the acronyms, but I figured that #WCW was Woman Crush Wednesday.” She posted a picture of her “inspiration”, former jailbird Martha Stewart. “All I want to do is be a homemaker. I started baking bread in January,” she declares rather maniacally. “I want to make my own yeast next.”

As it turns out, Olsen is less Martha Stewart Show and more Great British Bake Off. Deep down, she’s a neo-Brit from the rural counties: “The countryside there is my happy place, I love Suffolk. I love Somerset, I love the Cotswolds,” she blurts out. “I love the people. I love pub culture, Sunday roasts, long walks, even the rain… I’ve been there in every single month of the year. I would love to live in England for some portion of my life.”

Her nesting hormones may be in overdrive: she has just moved into her first owned property, in LA, with her boyfriend of one year, Robbie Arnett, a vocalist and guitarist with the indie band Milo Greene. Olsen moved back to her native California from New York, where her older sisters still live, three years ago. She has renovated the 1970s house from its bare bones. She has a “realtor’s licence”, having worked for her estate-agent godmother after high school, and has been an interiors obsessive ever since: “I want to ‘flip’ properties.” She clarifies: “But with other people’s money.”

Olsen was born in the LA suburb of Sherman Oaks, the youngest of the four children of Dave Olsen, also an estate agent and developer, and Jarnie Jones, an ex-ballerina; they divorced when she was six. She remembers her childhood as “so pleasant, it’s almost weird. My memories are through rose-coloured glasses.” She never felt excluded from the symbiotic bond of her elder twin sisters, the toddler stars of Full House and Two of a Kind: “I saw it as an opportunity for them to compete over who could be nicer to me. I was, like, ‘She let me borrow her shirt!’” Mary-Kate and Ashley also provided early actor training — Elizabeth made occasional cameos in their films from the age of five. But she witnessed first-hand the collateral damage that came with her sisters’ careers, climaxing in the furore over Mary-Kate’s alleged eating disorder in 2004. So she took the quieter, higher road of thespian study, “nerding out” at her drama degree at the Tisch School of the Arts in New York.

If one needed proof that Olsen has never played the nepotism card, you only need to look at her early indie work — most of it gruelling even to watch. In the same year as Martha Marcy May Marlene, she made the budget horror Silent House, which was shot in extended 12-minute takes with Olsen either terrorised or screaming. In 2013 she starred in Spike Lee’s remake of Oldboy (murder, kidnap, amputation, incest), and then there was last year’s Wind River, a bleak film about the serial rape and murder of women on an Indian reservation in Wyoming. It was only in 2014 that she took on her first blockbuster roles in Godzilla and as the Scarlet Witch in Marvel’s Avengers franchise. The latest instalment, out this month, can be summarised as the Avengers meets Guardians of the Galaxy, Doctor Strange, Black Panther and “every single f****** person who’s ever been in a Marvel movie”. The shoot in Georgia had the mood of a lazy student dorm: “Six of us wouldn’t be working most days. At some point, we’d eventually bump into each other and say, ‘What did you do today?’ ‘Oh, I just napped, I watched TV.’” At first she was intimidated by “Downey” (“I call him Robert to his face”) et al’s knack for casually delivering superhero banter in the throes of action.“They can just do humour in high-stakes situations while being out of breath,” she says. But the superheroes have all become friends: “We’ve been together for a year of shooting.” In Atlanta, they would sneak to baseball games, and when they are all in town they gather for barbecues: “Downey hosts.”

Olsen didn’t attend the Oscars this year. “I only go to these things if I’m in the mood.” She pauses. “Generally, I’m not.” She prefers life under the radar, avoiding anything that might be a whiff of blood to the sharking paparazzi. Recently she was driving around late at night for hours pursued by a photographer, too scared to go home and expose her new address. “It shakes me to my core. I don’t give a f*** if you want to photograph me looking shit, but just take the photo and go.”

Some pressure has been lifted now that she’s not dating a fellow actor. She’s previously been linked to her Captain America co-star Chris Evans, and Tom Hiddleston, who she worked with on the Hank Williams biopic, I Saw the Light. “I wouldn’t be, like, ‘I’m never dating an actor again.’ But it is horrible at the beginning. Like, ‘Is someone gonna find us out?’ ‘God forbid someone takes a photograph of us!’ It’s so weird. It’s not healthy in a relationship. It creates a false kind of intensity.” Recently she did a very un-Olsen-esque thing: she posted an effusive PDA to Arnett on Instagram.“Oh yeah, I love him. But if he were an actor, I would be, like, ‘Get out of our lives! No one deserves any information about my relationship!’” Rumour has it they met on holiday in Mexico. Soon after, during an Avengers shoot in Scotland, the couple went on a road trip to the Isle of Skye. Olsen has a William Boyd-style fantasy “of living in a village next to a rocky sea wearing a fisherman’s hat in the rain”. That’s her vision for later life. The next step is “raising children in the woods in northern California. But I’ve got to earn my right to live in the woods. So for now, I still have to hustle.”

Avengers: Infinity War is in cinemas from April 26

I’ve updated the gallery with the beautiful photoshoot.