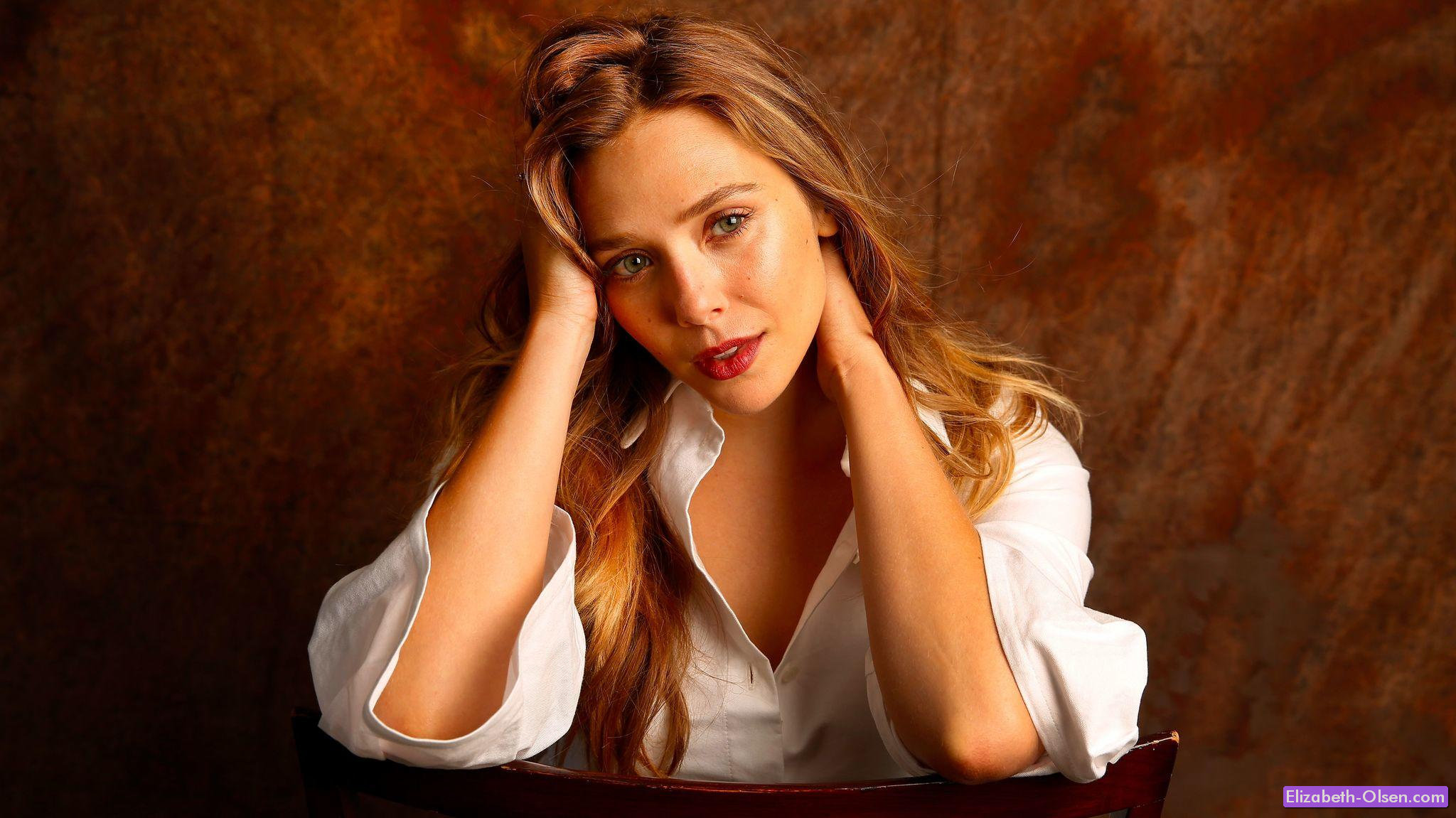 LA TIMES – Room 64 at the Chateau Marmont is possibly the most Instagrammable spot in L.A. Its wrap-around terrace is suspended just below the homes built into the Hollywood Hills, tiny glass boxes that form their own constellation when night falls. Rumor has it Howard Hughes once lived in this two-bedroom penthouse, spying on girls at the pool below, decades before Lindsay Lohan and Lady Gaga crashed here for a slumber party.

Today, however, it is home to the actress Elizabeth Olsen, who has arrived at the hotel with a team of people to help beautify her. High-heeled sandals are lined up on a desk. There are multiple pieces of luggage containing makeup kits. She is wearing borrowed diamonds on her fingers, paging through the room service menu, from which she can order whatever she would like.

It’s a scene, no doubt, that would incite lust among her half-a-million Instagram followers. But she doesn’t feel like she knows how to do the setting justice. Just this morning, she attempted to photograph her breakfast, but then ended up deleting the image in haste.

This is not a problem that her character in “Ingrid Goes West” would have. In the dark comedy — one of two films the 28-year-old is starring in this August — Olsen plays Taylor Sloane, a social media influencer who has established a reputation as the quintessential California cool girl. She tools around in a vintage Mercedes, is perennially reading Joan Didion’s “The White Album” and spends her weekends at a Joshua Tree abode. When she photographs her breakfast — avocado toast, obvi — it always looks pretty.

Matt Spicer, who directed the film, felt certain that Olsen could embody this kind of aspirational figure. Sure, he was a fan of her acting, but he’d also noticed how often she popped up on best-dressed lists. She also had proximity to the style world via her sisters, the twins Mary-Kate and Ashley, who run two of their own fashion lines.

“She has a natural charm and likability to her, which isn’t something you can really teach,” he says. “She’s one of those girls that other girls look up to. Since we did the movie, I think I’ve gained 1,000 Instagram followers that are just Lizzie fan accounts.”

And for the most part, it appears that those fans gravitate to Olsen due to who she is off-screen. Even though she’s been part of the hugely popular Marvel universe for two years — playing the reality-altering Scarlet Witch in “The Avengers” and “Captain America” films — most headlines about her still tend to relate to her style choices. A quick Google search of her name turns up five Daily Mail articles from July alone, nearly all centered on her clothing.

But Olsen has been steadily building up a respectable film resume since emerging as an “it girl” at the Sundance Film Festival in 2011, where her performance in “Martha Marcy May Marlene” signaled the arrival of a formidable new young Hollywood talent. A couple years later, she completed her acting studies at New York University’s Tisch School of the Arts and began taking roles in movies from bigger filmmakers, including Spike Lee (“Old Boy”) and Gareth Edwards (“Godzilla”).

Then Marvel came calling — a huge coup for Olsen, who grew up watching action-heavy flicks from the Indiana Jones and James Bond series with her father in Toluca Lake. But participating in the superhero franchise has also meant turning down a number of projects that could have shown off more of her acting ability — including a role in Yorgos Lanthimos’ critically acclaimed “The Lobster.”

“There have been things more in line with the career arc I’d like to create that I had to turn down due to scheduling conflicts,” she explains. “You want to create a personal canon.”

That’s what she’s hoping to bolster this month with “Ingrid Goes West” (Aug. 11) and “Wind River,” which debuts Aug. 4. The two movies, to put it mildly, are incredibly different. “Wind River,” which earned filmmaker Taylor Sheridan the top directing prize in the Cannes Film Festival’s Un Certain Regard section in May, is a dark murder mystery. Olsen stars opposite her “Avengers” co-star Jeremy Renner as a rookie FBI agent sent to Wyoming to investigate the death of a local woman on a remote Native American reservation.

The role would require the actress to train with a veteran law enforcement officer and learn how to shoot a gun — opportunities she relished. She was more worried about flying to Park City, Utah, for production, because she hates the cold and high altitude.

“So I bold-faced lied to her and said, ‘We’re not shooting high and it’s not cold there,’” Sheridan recalls with a laugh. “I knew it would be, which was one of the things I loved about it — you can see it on her face in the movie that she really doesn’t like the cold. But she overcame it.”

The director, who nabbed an Oscar nomination for writing “Hell or High Water” and also scripted “Wind River,” cast Olsen long before Renner. He says he wanted her from the “very, very, very beginning” because he responded to an “essence of confidence” she exuded — a certain kind of toughness. “There’s a blue collar element to her, which I mean as a compliment,” he explains. “That’s how grounded she is, and maybe it’s because she grew up with [Hollywood], she’s able to see it for what it is.”

Renner, who plays a local U.S. Fish and Wildlife Service agent who takes Olsen’s character under his wing, admits he put off reading Sheridan’s script for months. (Chris Pine was originally cast in the role.) Eventually, the actor decided to sign onto the film because he wanted “to work with Lizzie in a different way — in a real way.”

“Here, I got to observe somebody working in a very different capacity — with more emotional intelligence, not just being in a costume and the whole thing,” the actor says. “She had to be pretty bad-ass with a handgun, I’ll tell you what — and that’s coming from a guy who knows how to use a lot of weapons.”

“Ingrid Goes West,” of course, didn’t require quite as much prep — though Olsen did start a secret Instagram account, following women like lifestyle guru Jenni Kayne, fashion blogger Aimee Song and Who What Wear founder Hillary Kerr for inspiration. Spicer encouraged her to start posting her own photographs, which she did: one of a crusty baguette with dipping oil, another of some Diptyque candles. (“Those first ones were a little bumpy,” the director says with a laugh. “Like, food that doesn’t quite look as appetizing as it should, or sunsets. Very obvious starter photos.”)

Then, this winter, Olsen decided to bite the bullet and start her own public page.

“I decided to join because I realized I was only taking something away from myself,” she explains. “It’s so funny that people like to pretend that they’re maybe or maybe not getting paid to post something. Financially, it’s a brilliant opportunity. Like, I’d really love to be a brand ambassador. I’d love to do a campaign. I think sometimes working with brands or different cosmetic companies — that can help people recognize your face and then they go see your movies. I was only hurting my opportunities by not participating.”

While some young Oscar winners like Jennifer Lawrence and Emma Stone have held out on joining the platform, it has increasingly become commonplace for even serious actor types — Anne Hathaway, Brie Larson, Shailene Woodley — to open up on social media. Before, Olsen says, she was “being old-school about it” — something she learned from her sisters, who she acknowledges are “notoriously private people.” But even they supported her launching an Instagram account. And besides, she’s not good at being “super mysterious.” She’s too chatty for that. Plus, there are plenty of accounts she wants to keep stalking.

“There are so many times I’ve seen a picture and thought, ‘Oh, God, how do they make those flower arrangements look so great all the time?’” says Olsen, who recently bought her first home in L.A. and is decorating it with an aesthetic she describes as Diane Keaton’s Hamptons beach house in “Something’s Gotta Give.” “Or: ‘How expensive are those chairs I’m looking at on Pinterest? Did they find them at some place I’ve never heard of? How do you have that kind of eye?’”

The rest of the photoshoot is posted in the gallery.